My schedule got changed again this week because one of the international kids from Ecuador, wanted to go on a rec center trip to Walmart. So we traded days..she is working this morning for me and I will be working Wednesday night for her. I went shopping in Flagstaff with Robin last week. Robin was nice enough to take me to the bank so I could walk in and get a temporary bank card, as I still had not gotten mine in the mail.

According to the weather app on my phone, I don’t expect rain until the middle of May. But Utah and Colorado might get rain and even a bit of snow in the mountains, this month. But as usual that could all change next week. Today it’s about 63 degrees and windy in Tusayan.

I am typing this on Monday but probably won’t post it until Tuesday, when I go out to for breakfast. Last night I went to a dinner buffet at one of the local hotels. It was yummy but rather expensive (in my opinion..$28 is expensive). Being Easter, I ate lots of ham and spare ribs. Cheesecake isn’t on my diet but I had some anyways. Guests will usually come into the store and ask me about different restaurants in town. I had only tried breakfast here at the “Canyon Plaza Resort” before, and now I can honestly tell people that their dinners are helluva lot better. I was stuffed by the time I walked home. I fell asleep before 7pm, and got back up around 2am. 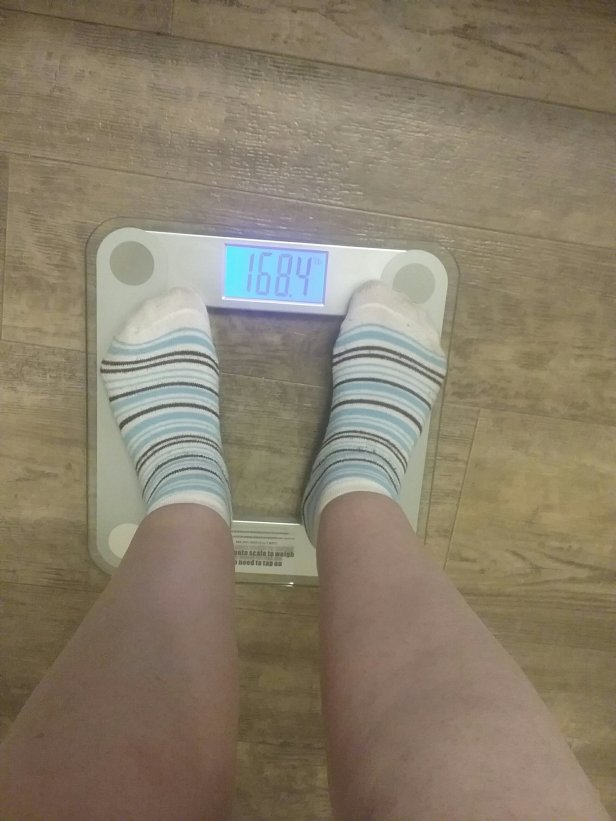 The above picture was taken last week..I was pretty excited because I don’t remember seeing the 160’s since May 2015 (according to what I could find posted online). While I was in Flagstaff I bought some pants to wear to work. All my size 18 pants were to big..I had actually started wearing a belt everyday. I had given up belts years ago, but now they were a necessity. The belt came with a pair of pants I bought over a year ago. Even though the pants fit at the time, the belt was to small. Now I can buckle the belt into the third hole. Anyways I am now wearing size 15/16 pants.

Today (Monday) I am finally getting around to putting away the stuff that I bought last week. Good thing I still have a room to myself…so far. Seeing as I bought a view movies from a thrift store I will also take time to watch a dvd movie that I had never heard of, “Eternal Sunshine..of the spotless mind”. It stars Jim Carrey and usually I like his movies. Ok this has got to be his strangest movie ever.

Last week, I ordered some craft supplies online. They should start arriving Thursday. I can’t wait to be able to create stuff again. I am hoping to create things to sell later. Not sure if that means I have to register for a business license in order to do this but I will figure that out later.