While Western cultures have historically associated the number 12 with completeness (there are 12 days of Christmas, 12 months and zodiac signs, to name a few examples).
Any month that starts on a Sunday contains a Friday the 13th, and there is at least one Friday the 13th in every calendar year. There can be as many as three Friday the 13ths in a single calendar year. Any year that has 3 Friday the 13ths, must be a bad year because supposedly bad things happen in 3’s.
In Italy, however, 13 is seen as an extremely lucky number, especially when it comes to gambling. The number 13 is also associated with the Goddess of Fertility, who controls the lunar cycles. This created the belief that anything related to the number 13 brings prosperity and abundant life.

So I have wondered for quite awhile…if there are 13 lunar cycles then why don’t we just have 13 months? If every month had an even 4 weeks (28 days) then we would have 13 months. But I guess that some people are so superstitious that they would be to scared to leave their beds for the whole month. 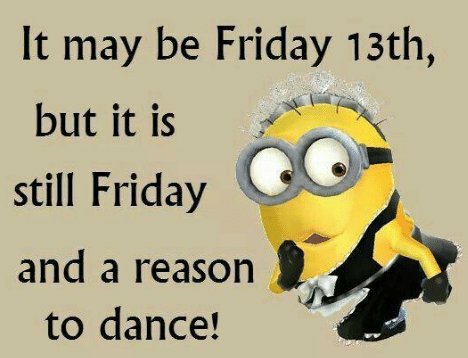 Today is a very slow night at work…so slow, its downright boring except for listening to Brandon’s silly jokes in the hotel lobby. My hellofresh box got delivered tonight while I was at work. I had one of our maintenance guys drop it off in front of my door. So I will check it out later and let you know my opinion later during the weekend.